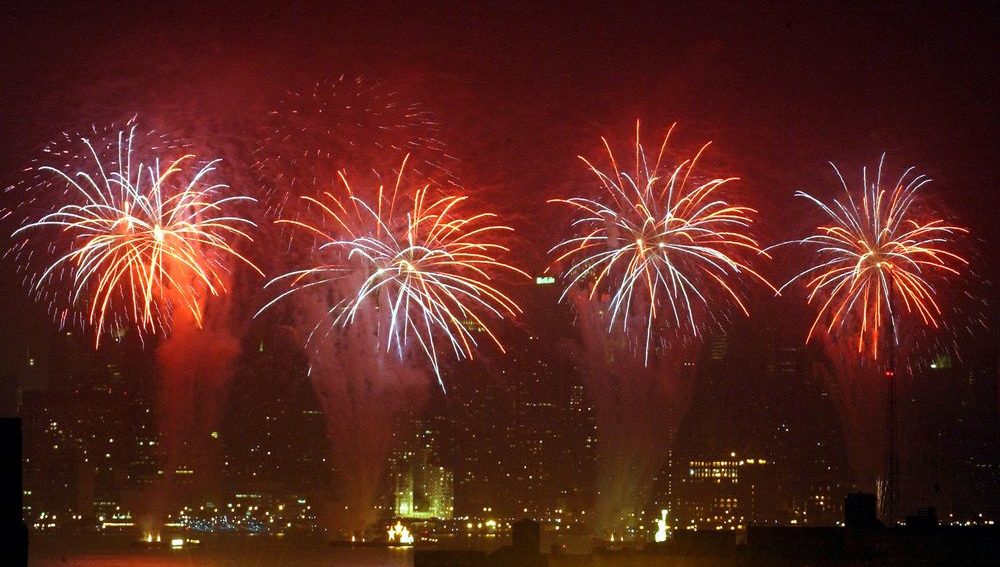 Grand Finale…all the Tools were Assembled

In the depths of the Great Depression, the Dow Jones Industrial Average (DJIA) hit a low of 40.56 in July 1932. Since that time there have been three major advances. The first Cycle Wave peaked in 1937. The second Cycle Wave was a correction that last until 1942, shortly after the United States got into World War II.

The third Cycle Wave lasted about 24 years from 1942 to 1966. This was a tremendous post-war boom for our country and for the world as countries recovered and rebuilt.  But from 1966 until 1982 the stock market chopped sideways in a complex correction for Cycle Wave IV.  There were many ups and downs but the DJIA could never really break through and sustain a move above 1000.  This wave pattern fit the Elliott Wave guidelines of alternation perfectly in that Cycle Wave II was a sharp pullback and Cycle Wave IV was sideways. 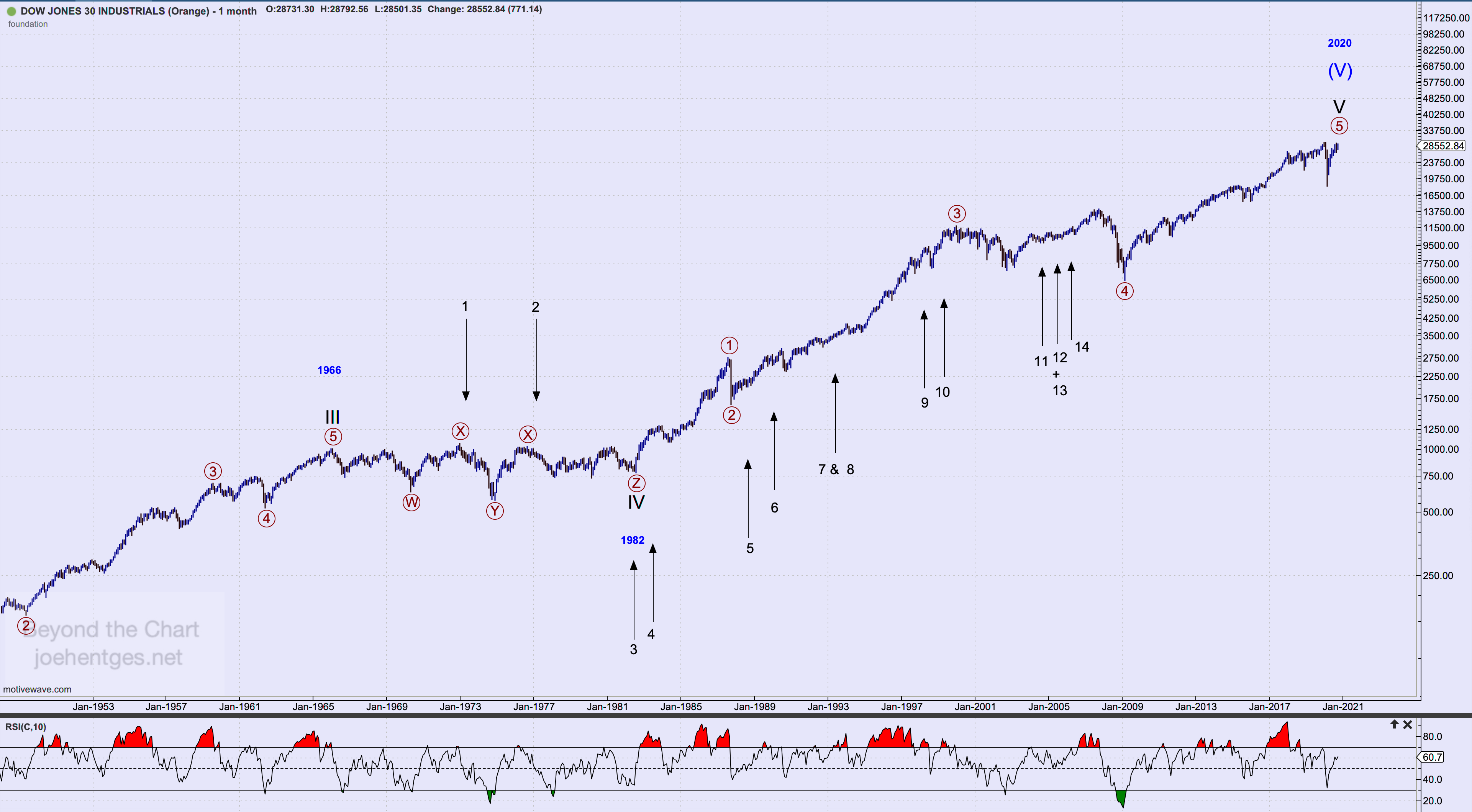 When you think about all the tools of market participation and speculation, it is amazing to see when these tools were introduced. Almost all of them were launched during Cycle Wave V.  This wave has created the most extreme market price action of the entire 88 year history of SuperCycle (V). So what tools are we talking about?

The following is a list of the market instruments and when they were introduced. I am numbering them and putting their corresponding number on the long-term monthly chart of the DJIA.

I may have missed a couple but you get the picture. Now these instruments don’t cause irrational exuberance but they sure help social mood to get played out in the stock market.  I think that many of these instruments are great tools and when combined with the technological revolution since 1982, it has been simply amazing.  The explosion in the stock market during this Cycle Wave V from 1982 is incredible. 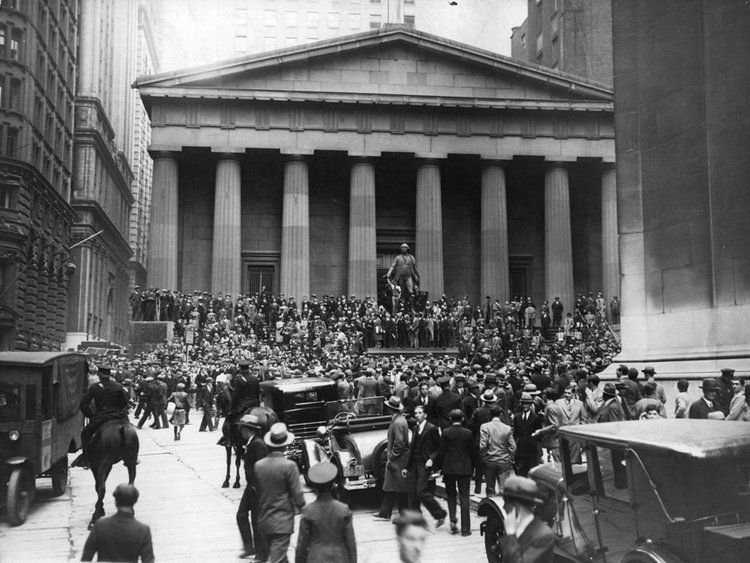 The sell-off in March was a crash in the stock market. I’m calling it the Covid Crash. The Dow Jones Industrial Average (DJIA) dropped 38.4% from intra-day high to low in just 27 trading days. We are now approaching the 5 month anniversary of the Covid Crash low in the market.  The DJIA has rallied 54.6% from the March low to a recent high on August 11. See the chart below.  So where do we go from here?

This is a reminiscence of two other times in market history when I think about the swiftness and brutality of the recent crash. The 1987 Crash and the 1929 Crash.  The 1929 Crash is of course, the most famous because it led to the Great Depression.  In the chart below you see the price action surrounding the 1929 Crash.  The DJIA dropped 49.4% in 47 trading days and then rallied 52.2% in 5 months. But that was it. On October 9, 1930, approximately 10 1/2 months after the stock market bottomed in 1929, the low was broken. It took 25 years for the 1929 high to be surpassed.

The 1987 Crash was also a very scary time as the market experienced its biggest one day drop ever. In the chart below you see that DJIA dropped 40.2% in 39 trading days.  At the time many people were concerned that we were about to experience a repeat of the aftermath of the 1929 Crash. The DJIA only rallied 28.8% in 5 months, looking very weak. But the market did not break down. The low was not broken. The 1987 high was surpassed on August 11, 1989, only 2 years after the 1987 peak.

So here we are about one week shy of 5 months from the Covid Crash low. What will the market do now? We are experiencing significant divergences between major indexes, similar to what happened in 2000. If February was the high in the DJIA then the market should turn down fairly soon. This month is 5 months after the Covid Crash low. 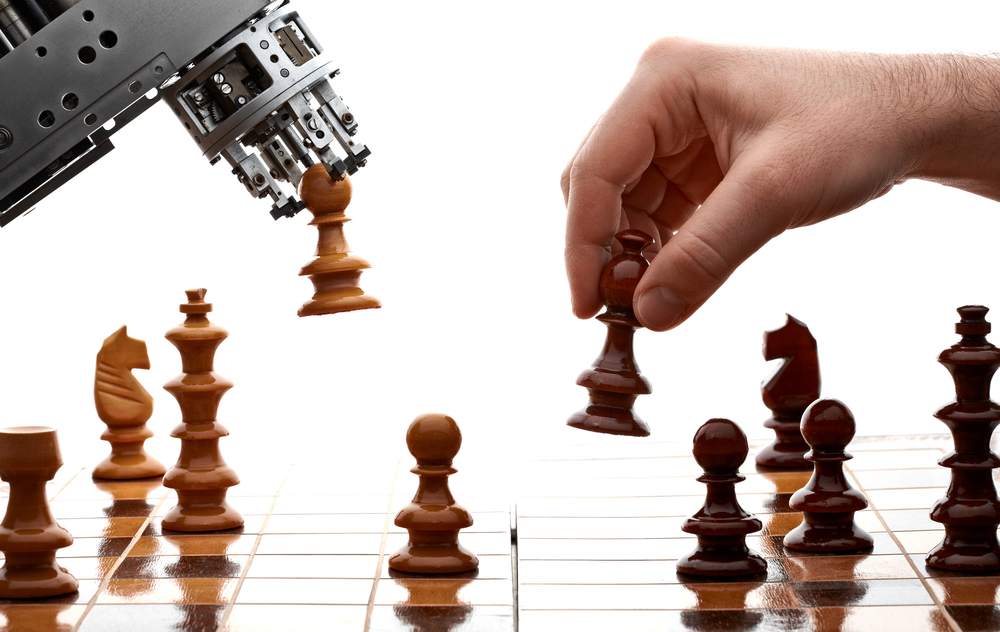 We just completed market action for the month of June and I want to provide some perspective on the three major indexes. These are monthly charts and the key level I'm highlighting is the January 2018 close.

That month was the peak of huge momentum for the markets. Since then the major indexes have been oscillating back and forth in huge gyrations. The first chart shows the Dow Jones Industrial Average (DJIA). The DJIA close June lower than the close for January 2018.  Bears are winning.

The second chart is the S & P 500 Index (SPX). It is fascinating to see that the January 2018 close resides right in the middle of all the price action since then. Bulls vs Bears is a draw at this point, with an edge to the Bulls due to higher close.

The third chart is the Nasdaq Composite Index (COMPQ).  This one has some huge oscillations also but with an upward slant to it.  There is a bit of frenzy/bubble going on here, similar to the 2000 bubble.  So far COMPQ is the only one of the three to push above the February 2020 highs. Bulls are clearly winning this battle...but for how long? 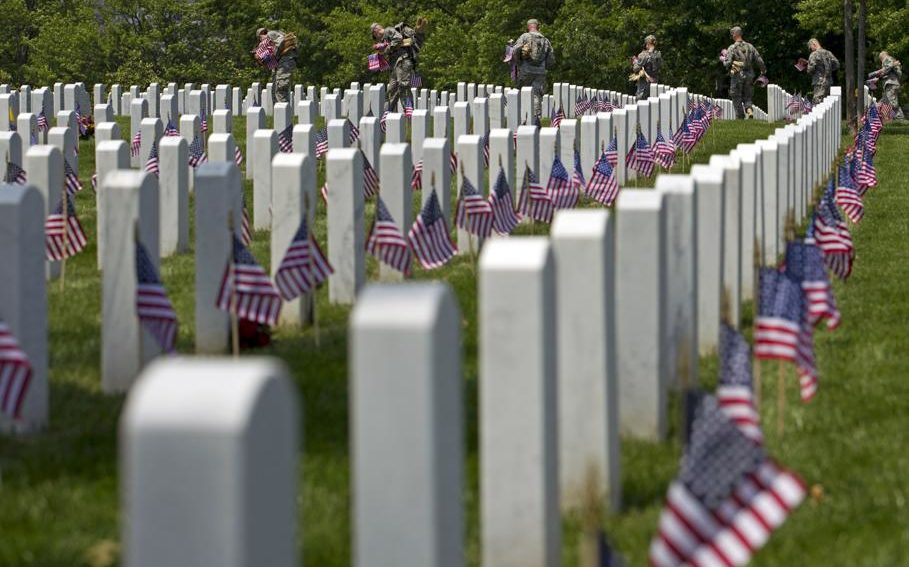 The following is a post I wrote last year on Memorial Day weekend. I see no reason to change it as I am proud to remember and honor those who have gone before us. This is definitely a different holiday weekend with millions out of work and fighting a terrible pandemic.

Here in the United States it is officially Memorial Day on Monday. Cookouts, camping, boating, the Indianapolis 500 all part of the official start of the summer season. But on this Memorial Day weekend my thoughts turn to remembering my Uncle Bob.

Uncle Bob served in the Army in World War II and the Korean War and then at the Pentagon for many years. He was a great guy and my favorite uncle. I was fortunate to have been able to spend some time with him in the late ’80s when we lived in Northern Virginia.

He would come visit the family and many times he and I would go play golf at Andrews Air Force Base and other courses around Washington D.C. I remember asking him about the war but he never wanted to talk about it. That was Uncle Bob.

Uncle Bob died in 1990 of cancer at the age of 69. He, like my Dad, just liked those cigarettes a little too much.  Uncle Bob was laid to rest in Arlington National Cemetery. I was there when they buried him. I have his flag and his medals.

Remembering Uncle Bob and many others on this Memorial Day weekend. Remembered …forever. 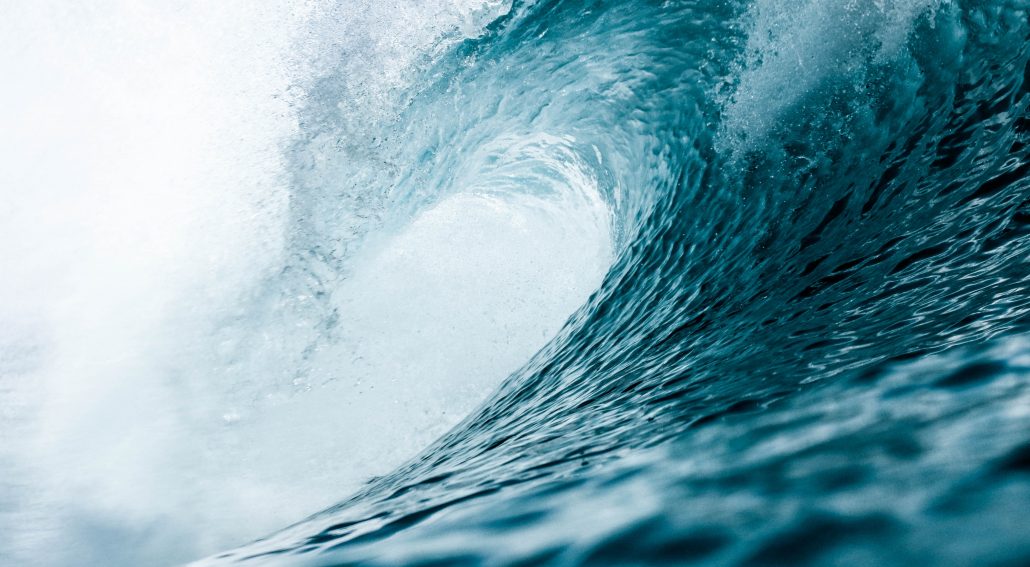 How Much of a Second Wave?

The stock market had a very strong move down from its high in February.  This is the end of the bull run from March 2009. And I believe it is also the end of an extended cycle wave from August 1982.

Since March 23 the DJIA has been in rally mode. People and the press are getting excited. Some are even saying it’s a new bull market. But this is just the first major bounce. This is Intermediate Wave (2). This kind of thinking about the market is exactly what happens as the first real bear market rally kicks in.

Through the high on April 29, the DJIA has retraced exactly 57.7% of the entire first move down.  Typically for a wave 2, I look for a sharp correction. Ideally a zigzag type of pullback that retraces 50 – 62% of the first wave down. That’s exactly the zone that we hit with price action thru April 29.  But how does this compare to other 2nd wave moves at major tops in the market?

I looked at several tops. First the top in 2007. This was the peak of Intermediate Wave B of a large Elliott Wave Flat Correction for Primary Wave 4 of Cycle Wave V. The first bounce in the move down from the top in 2007 retraced 71.6% of the first wave down.

The third significant top was the Primary Wave 1 of Cycle Wave V that peaked in August 1987.  This 2nd wave bounce retraced 70.2% of the first wave down. I’m sure the optimism was still pretty high just as the 2nd wave peaked and then crashed.

The fourth major top was 1966. In January 1966 the DJIA ended Cycle Wave III and a big move from the 1942 low. The wave two bounce retraced 59% of the first wave down. That first wave started a 16 year Bear Market that didn’t end until August 1982.

The 5th major top occurred in 1937. The DJIA had just rallied for 5 years coming off the Great Depression low in July 1932.  The DJIA peaked on March 10, 1937 and turned down in the first wave. The second wave bounce was a deep 82.5% retracement of the first wave. But the enthusiasm wouldn’t last long.  Cycle Wave II was now underway and prices rapidly declined.

And the final example is the historic 1929 top that occurred on September 3, 1929.  The wave 2 bounce retraced 58.4% of the first move down.  It occurred quickly and rolled over hard into what would become known as the 1929 Crash.